Baldness is a universal problem of rich and poor, old and young. This is a common problem of male and female. So far it was considered that baldness is due to a genetic disorder, or due to autoimmune (when your immune system goes against yourself) issues. If a father is bald then his offspring will share the same fate. But new research is emerging in this field which suggests a totally different scenario and treatment option.

Currently, bald people try to hide their empty patch on their head with a wig or go under the procedure of a hair transplant surgeon. Some other bald people choose certain creams and lotions like Regain etc. to have their lost hair back on their heads. But all these options have no substantiated evidence that can prove their efficacy. Most of these procedures and practices are a waste of time and money.

The basic fact is, if the ground has got basic ingredients missing or is blocked by something underneath, you cannot grow any crop in it. All the above procedures are temporary and provide surface beauty only for short or for a slightly longer period of time. But the end result is the same, all those who adopt the above methods remain BALD. 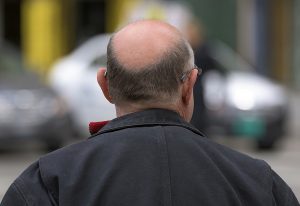 Recently scientists have discovered in the USA that a steroid DHT (Dihydrotestosterone) is made by our bodies when our body metabolizes testosterone hormone. What these scientists have found in their studies that DHT steroid is the major cause of hair loss in males and females.

Besides this, these studies have also surfaced the fact that DHT is also responsible for the growth of prostate cells. In simple language, those who get baldness have a higher risk of enlarged prostate and prostate cancer. The excess of DHT also produce symptoms like contact fatigue and hormonal imbalance.

Excess of DHT in females throws their bodies in hormonal imbalance state. This cause mood swings, depression, and hot flushes, etc.

Let’s go back to our original topic. Each hair on the head remains for 3-6 years after this time a new hair grows. In the case of baldness, this process of new growth of hair discontinues and old hair falls out. This gives a clean sweep on the head with the passage of time.

Each hair follicle has a part called PAPILLA from which a new hair sprouts. When the body produces an excess of DHT steroid it clogs up papilla and blocks the passage of growth of new hair. Now you can understand what I meant when I had said above ‘if the ground has got basic ingredients missing or is blocked by something underneath, you cannot grow any crop in it.’

In order to regrow your own hair on your bald head, you need to remove DHT from the papilla. This is the only fact which you should look at keenly.

There are very simple food substances and supplements which can be consumed to halt the production of DHT in its tracks. And also, there are topical blends which are found to be very effective to remove DHT from the clogged papilla, which ultimately facilitate the growth of new hair on a bald head.

For further information, you should contact your complementary healthcare provider.