According to the definition, an adjuvant is a pharmacological or immunological agent that modifies the effect of other agents. Adjuvants are added to boost the immune response in a vaccine, to produce more antibodies.

An adjuvant in the vaccine sounds a good thing, but no it is not always good for some children. Rather, an adjuvant can seriously damage a child’s immune system. If an adjuvant crosses the blood-brain barrier it can cause damage to the central nervous system. A child may suffer from seizures, anxiety disorder, depression, autism, hyperactivity disorder and many other behavioural, psychological and mental disorders. It is a well-established scientific fact that there is a two-way cross-talk between the immune system and the brain, that plays a crucial role in immunoregulation as well as with the function of the brain [1].

By the time children are 4 to 6 years old, in some developed countries, they receive a total of 126 antigenic compounds along with the high amount of aluminium (Al) adjuvants in the vaccines. Most of the vaccines which are administered to the children are not tested for their toxic effects and safety assessments are not carried out because vaccines are not considered as inherently toxic [1]. 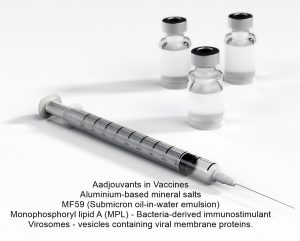 Although aluminium is a neurotoxin, during a critical period of brain development young children are repeatedly injected with high quantities of aluminium adjuvant from multiple vaccines. This may lead to neurodevelopmental disorder. During postnatal development, a young child’s brain is more permeable to toxins and kidneys are less able to eliminate them. Therefore, young children are at a greater risk than adults of having adverse reactions from aluminium adjuvants in vaccines. Just 2 – 3 immune adjuvants are enough to override the genetic resistance to immunity [1].

Macrophagic myofasciitis (MMF) is a debilitating disease that occurs in some unlucky people after receiving an aluminium-containing vaccine. Aluminium in vaccines may collect from the site of the injection or circulate in the blood, travel to other cells and lymph nodes and thus accumulates in distant organs such as the spleen and the brain [2]. MMF sufferers have symptoms including chronic fatigue, muscle weakness, joint pain, cognitive dysfunction affecting memory and attention, sleep disturbances and disabling headaches. Nearly 20% of patients of MMF develop autoimmune disease [3]. A very interesting yet alarming fact is this, MMF disease can be induced in mice, rats and monkeys by injecting them with the same vaccines, which are given to young children.

There are numerous studies which say aluminium in vaccines can cause autoimmune disorders [4]. Aluminium in vaccines has also been linked to conditions such as arthritis, multiple sclerosis, systemic lupus, Gulf war syndrome, chronic fatigue syndrome, MME, granuloma formation and allergic reactions [5].

Vaccine damage due to adjuvants in the vaccines can be reversed with detoxification agents,  specific homeopathic remedies and proper use of supplements [7].